Following on from A Day in the Life… I was talking to someone about my commute to my latest game for Toronto Wolfpack. This one involved a 6858 mile round trip from Halifax to Toronto! I was flying out for our home game against York City Knights and I joined them on their flight both to, and home from, Toronto. It was a good way to find out exactly how the flight affected visiting teams and what the time difference did to my body clock.

3429 miles From Halifax to the Allan A. Lamport Stadium a.k.a. The Den

I was to join York on their flight to Toronto on Friday morning, probably the quickest turnaround of any team so far this season (with teams normally flying out on Thursday). So, as I left home at 5.45am to catch a train from Huddersfield to Manchester Airport, I skipped down the driveway to my waiting taxi. 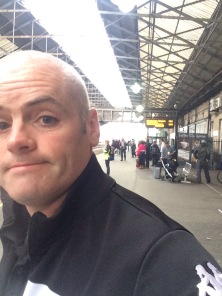 Get breakfast in the airport 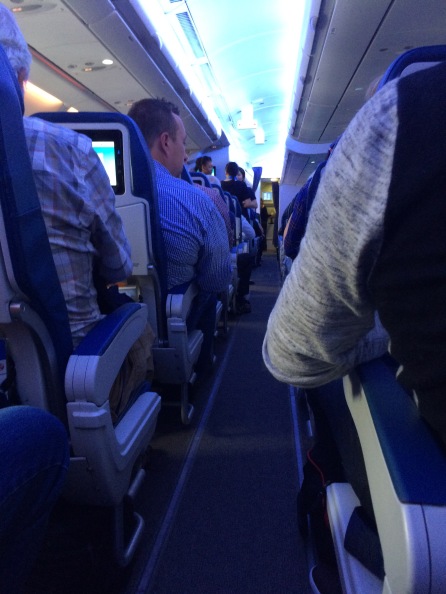 It always puzzles me when people that say that they couldn’t be bothered flying somewhere long haul because it’s “too long” or that “it’s too far to go for a weekend”. I love travelling. Well, I should probably re-phrase that. I do like travelling, but I like the fact I get some time to myself for a few hours! Anyone who says that it’s too far to travel doesn’t have 4 kids, a house, 2 jobs and a wife to keep happy. Those 12 hours travelling were bliss…

I’d seen some of the York lads, their coaching staff and match officials on the way through to the flight and I’d had a chat with some of them on the plane. We arrived at mid-day Canadian time and it was in the mid 20’s and bright sunshiiiiiiine. On landing, I found out that due to hosting participants for an international boating event, the team had recently had to move to different accommodation which was 40 minutes North of Toronto – a massive problem for me – but not for super Freddie. Federico is our co-ordinator over in Toronto and does a superb job of arranging loads for both us and the opposition. He was there to meet York Knights and the match officials and I told him I have no idea where we were staying. 10 Minutes later, he’s got me in a taxi and sorted it out. Hero.

If you think the M62 is busy, don’t get on Toronto’s Gardiner Expressway

It was a quick turnaround on arrival – the medical team were just leaving to go to training and to provide treatment to the players, so after dropping my bags I jumped in with them to make the 40 minute journey back to where I’d just come from. There aren’t really any amenities where we were at the new residences so after treatment we had to grab something to eat and went back to the apartments.

So this was the first night where the time had jumped back 5 hours. Effectively, when I went to bed at 10pm, it should have been 3am. I did have a tired spell at about 6pm (11pm UK time) but it wasn’t massive. The next morning I woke up at 7am fully refreshed after 9 hours sleep and felt that good that I went for a run! We returned to the original apartments, which are closer to the ground so the players can get their pre-match treatment and I set off to the ground for the usual pre-match set up. So far, no body clock malfunctions.

Pre-match treatment for the players

Today was a bit special. It’s ‘Canada Day’ and the country is celebrating 150 years of Canadian Confederation. The Wolfpack are wearing a specially produced red, white and black kit and it’s looking like a hit with the fans – most of the merchandise sold out in under an hour!

We had an injury in training pre-game and had to make a squad amendment. Normally a run of the mill exercise with paperwork to complete. However, when I had our Director of Rugby, Brian Noble, sign the paperwork little did I know that a piece of history was also being made. Brian recently received an MBE for his services to sport. A fantastic reward for his 40+ years of dedication. But on signing the documentation, he told me that this was the first time he had signed anything as an MBE – so we captured the moment for him to cherish forever… 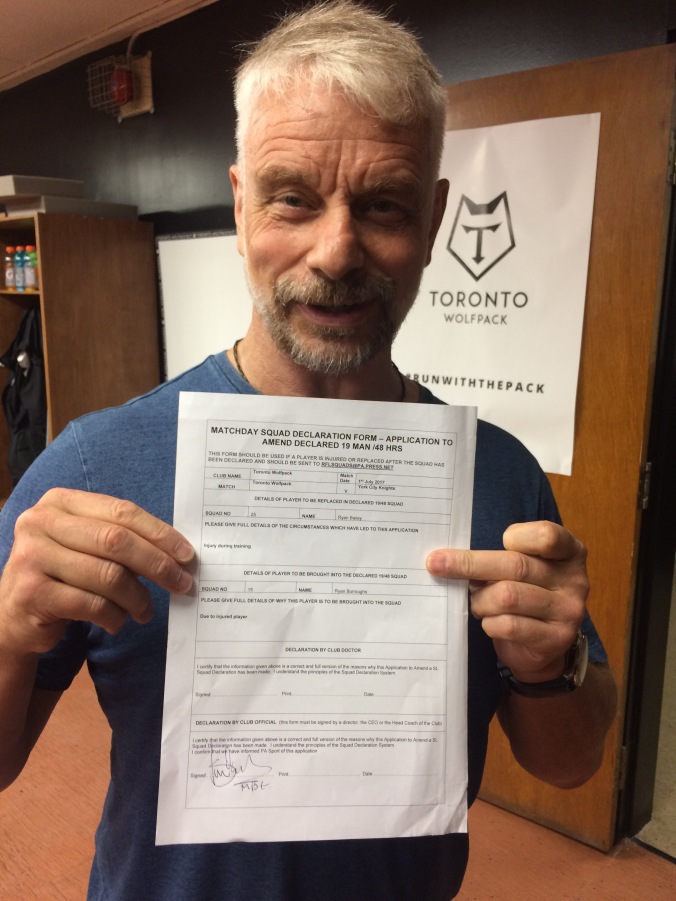 The game goes according to plan and we won 64 – 22. The Canada Day celebrations went on well into the night but the late 7pm kick off meant we were trying to get back to our apartments right in the middle of all the celebrations. We were actually stuck on the expressway, next to the CN Tower when all the fireworks went off – could have been a worse place to be stuck in traffic!! 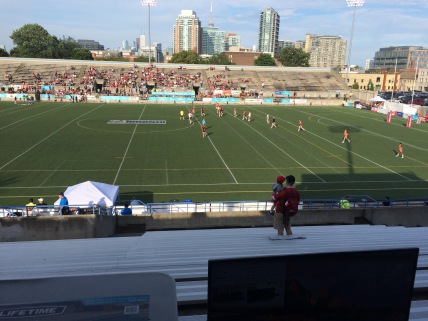 We were flying home the next day – Sunday – and as luck would have it, the team had been invited to Woodbine Race Course for a special Queen’s Plate meeting, which just happens to be right next to the airport. Two birds, one stone. The down side been that I didn’t get to stay and see the Goo Goo Dolls who were playing after the meet (think Iris)! I did, however, get a lift to the airport from a great young Canadian prospect currently making his way up the Wolfpack ladder. Quinn Ngawati is an 18 year old Canadian resident who made his debut for the Wolfpack against the University of Gloucestershire All Golds and what a debut it was. Whilst speaking to him at length at the races, he is a very unassuming and modest person who belies his physical presence on the park. I was genuinely surprised after meeting him at his aggressive and hard hitting debut. 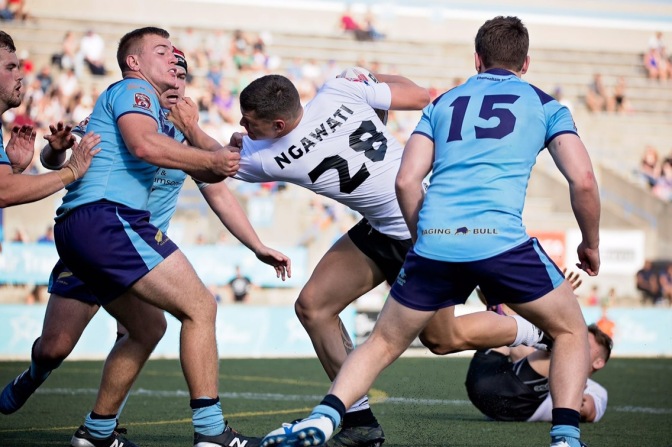 The flight home was later that evening and once back in Blighty, it was probably the strangest journey home from a match I’ve had. Air Transat flight’s from Toronto on Sundays only return to Glasgow, Scotland. They fly to Manchester on Mondays. As we were flying on Sunday, we were to land in Glasgow. We had been in constant touch with the York Knights staff and they had agreed that I could jump on their coach from Glasgow down to West Yorkshire!! I would like to thank John Flatman (the club chairman) James Ford, Chris Spurr, Mark Helme and the whole squad for making what could have been a very awkward journey, an easy one! All great blokes for allowing me on their coach when they could easily have said no.

All back home for 4pm Monday afternoon. Had I enjoyed it? Definitely.  Was I tired? Yeah, a little (the races probably didn’t help!). Is the trip do-able as a visiting team? I would say that if it’s well managed, it’s a very feasible trip to make with little detriment to the away team’s players. The journey there is fine and the jump backwards in time didn’t seem to have any affect on me at all the next day, as we took off at 10am and landed about mid-day. It was harder on the way back having 5 hours taken off you on an overnight flight but the celebrations definitely made that worse! I think that without ‘celebrations’ it wouldn’t have had much affect at all. As a player I could see that the travel could affect re-hab but if you spend Sunday on re-hab before flying I would imagine this would massively reduce the effects.

So roll on the Kingstone Press Championship and let’s see how both Toronto and the visiting teams cope with each other…..

One thought on “A day in the life II”